Quick and valuable ideas you can watch, listen to, or grab & take with you that can make your day brighter, your work more effective, your job more fun, or your challenges less challenging.

Dr. Linda Hill, author of Being the Boss, explains the 3 Imperatives for Becoming a Great Leader via the Giide interactive auditory learning platform. Listen now! 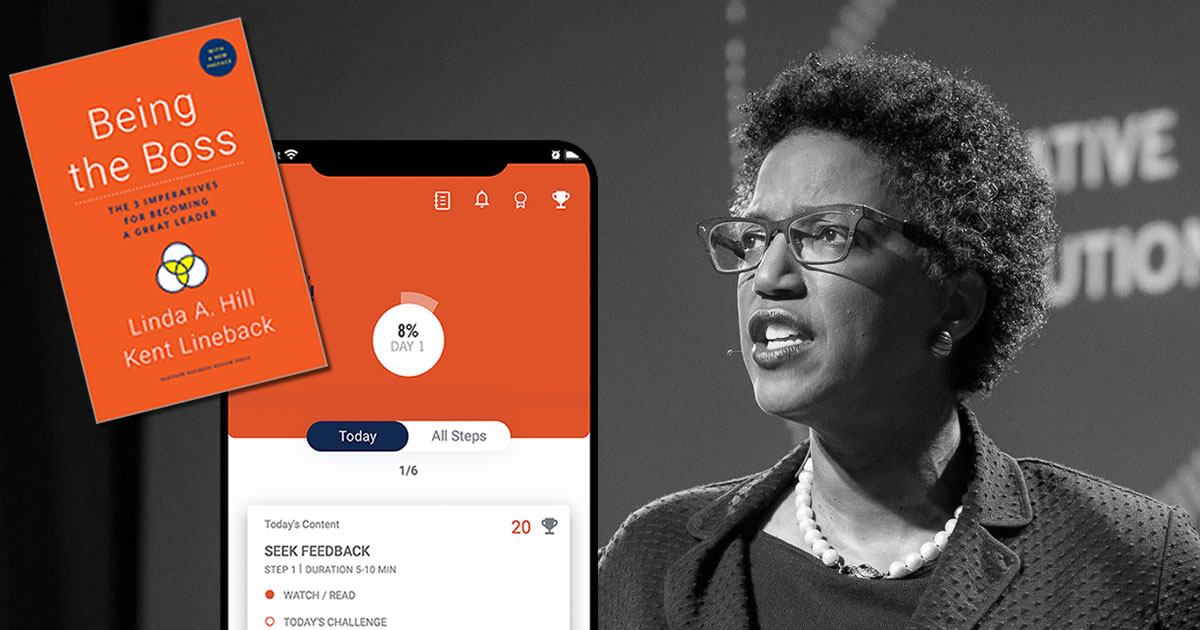 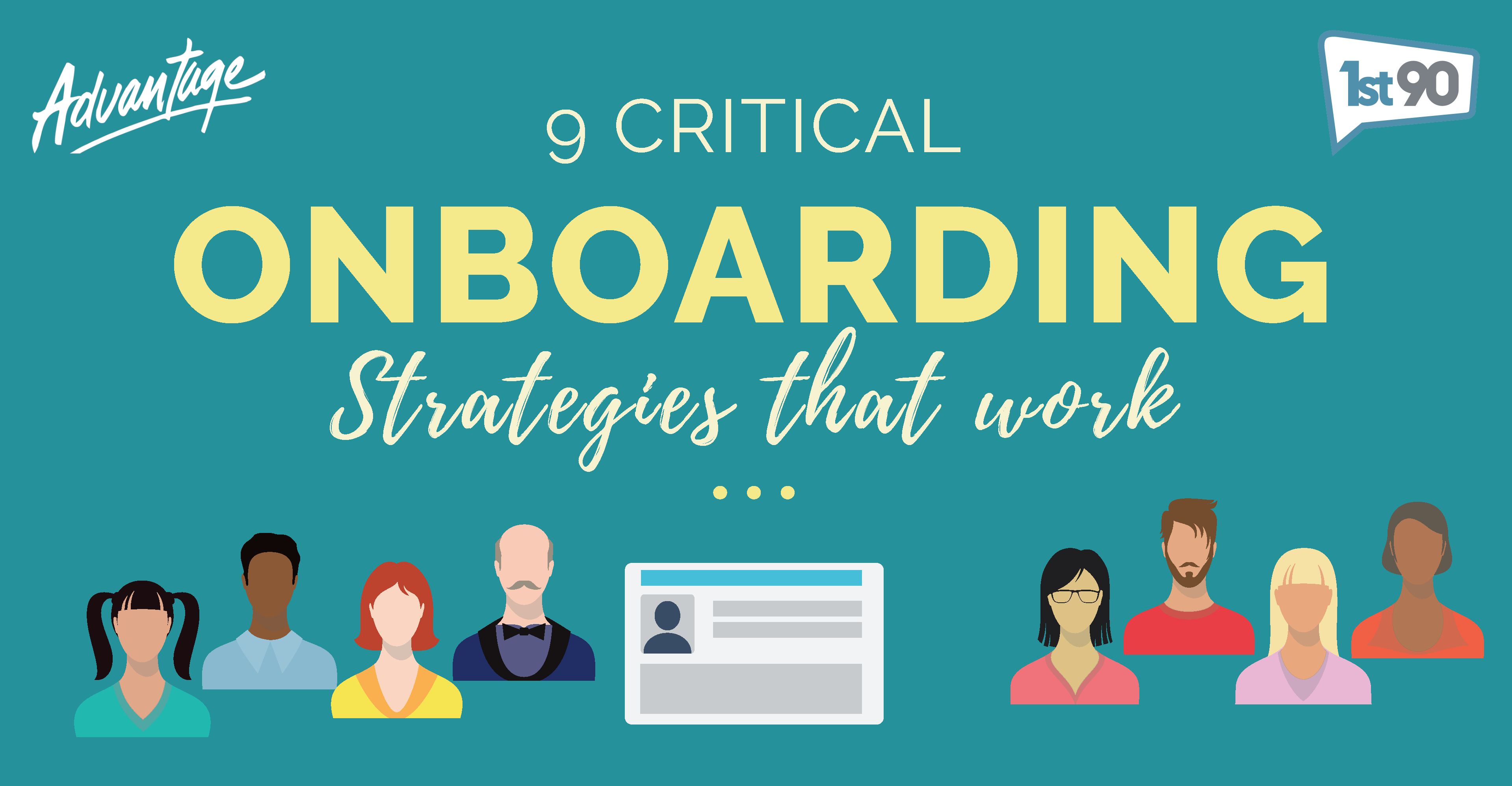 Bringing a new hire up to speed isn't just about performance. Build an emotional connection by helping them understand your organization's values, your purpose, and your culture. Here are 9 ways to get it right.

Optimism: It's your choice

Positive thinking isn't just for making yourself feel better. It's a strategy backed by science that can improve your relationships and your business results. Find out why in this short video by Lori Urban, a partner at Advantage Performance Group and a facilitator for the BlueEQ™ emotional intelligence self-assessment and workshop.

Related: Check out your engagement skills with our BlueEQ mini quiz

Define or renew your values 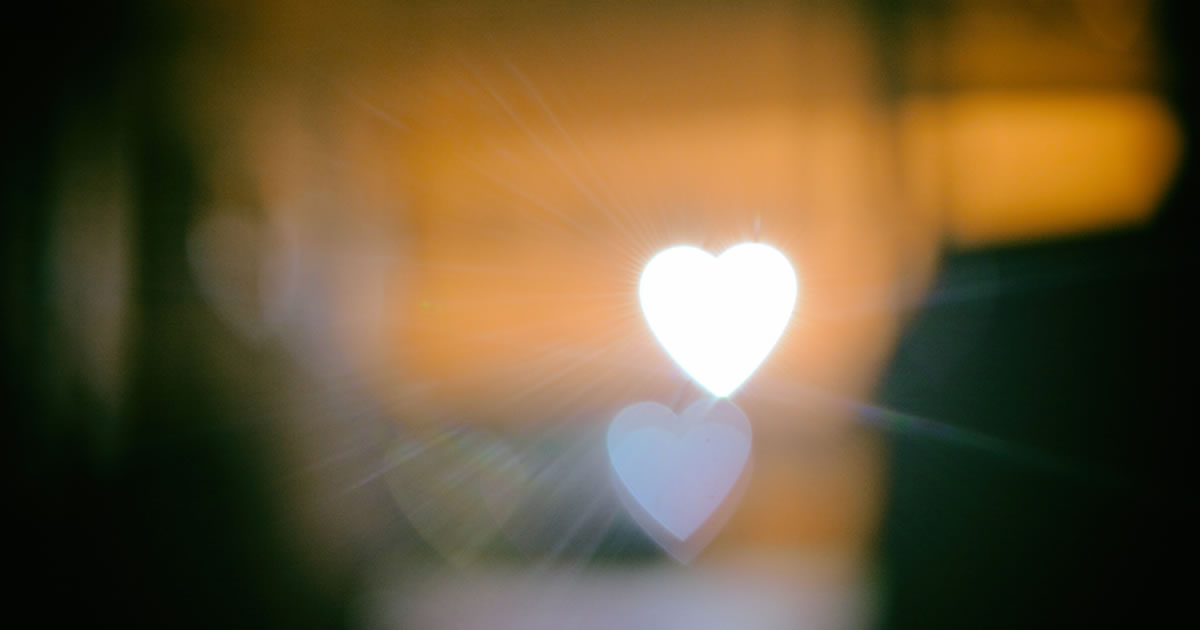 How to stay focused on what really matters, regardless of what comes next
When it feels like almost everything is changing, values are the one standard that we can all count on to remain steady.

Here is a quick exercise you can do to help define or renew your team’s (or your family's) collective values.

Related: A story of friendship

Building a great corporate culture is more important now than ever, especially with the ongoing challenges of remote work and a relentless pandemic. Discover the jewels that build a great culture with the free resources in our Culture Quest. 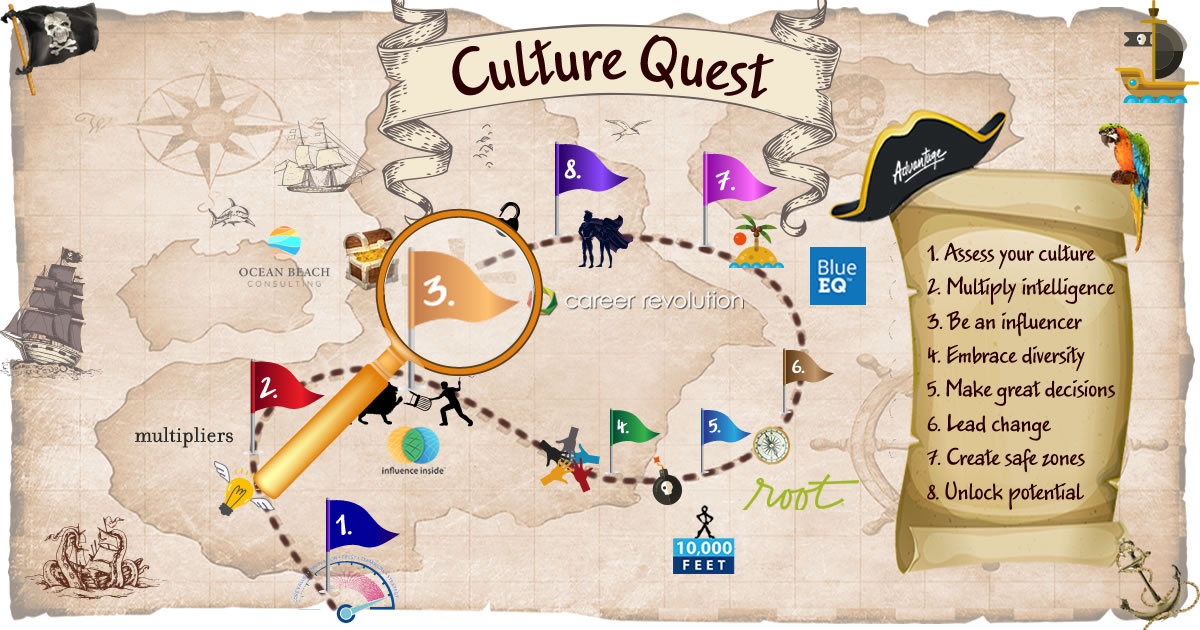 Related: The power of kindness
After an unimaginable loss, one of our own reflects on 'the generosity that resides deep within the human spirit.' 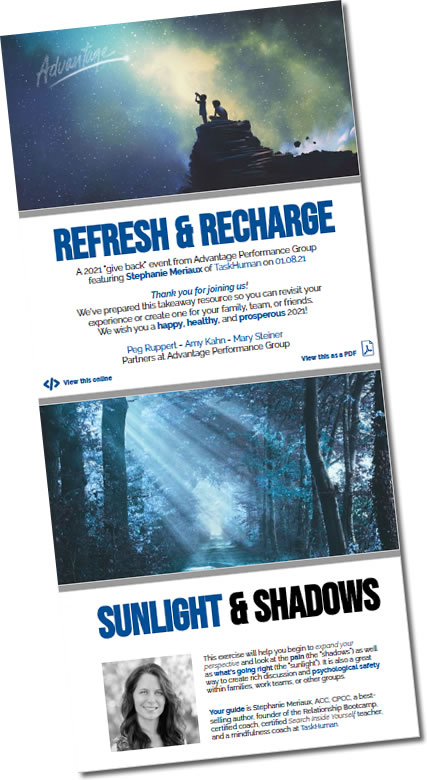 Wellness coach Stephanie Meriaux of TaskHuman shares Sunlight & Shadows, a mindfulness exercise to help you expand your perspective, create rich discussions, or build psychological safety. Use it for yourself, your family, your friends, or your team.

Live in a thousand joys of the present moment

The power of the present was a poignant message for our recent holiday Zoom party from the actor John O'Hurley in a Cameo we sought out for our event. While we expected humor, we're especially glad he chose to share something more.

Bonus: The Essence of J. Peterman: John O'Hurley on Storytelling, Introspection, and Seinfeld

Dr. Elmo, the original performing artist for the iconic Christmas comedy song, Grandma Got Run Over By a Reindeer, sends Advantage Performance Group a special holiday greeting we'd like to share with you courtesy of Shirley Dahl, our client services manager.

If you need some inspiration this holiday season, or if you just want to help spread some Christmas cheer, have another listen to his unforgettable hit tune.  We believe Dr. Elmo's story will forever change what it is you really hear.

Click the link below to reveal more about Dr. Elmo

Grandma Got Run Over by a Reindeer

Dr. Elmo is the original performing artist for Grandma Got Run Over by a Reindeer, which has sold over 12+ million copies since first broadcast by a San Francisco radio station in 1979.

When Grandma was initially played on radio, some stations banned it, the Gray Panthers picketed it – they thought it was ageist, and a DJ got fired for playing it hundreds of times over and over again.

Initially, record companies rejected all of Dr. Elmo's efforts to put the song on their label. That changed when his self-produced music video of Grandma played on MTV in 1983. Sony then became the first major label to distribute the now classic Christmas tune.

In 1983 Grandma outperformed White Christmas by hitting No. 1 on Billboard’s chart.

Consistently the most requested holiday song of the past 3 decades, Grandma has secured its place in American pop culture.

Grandma Got Run Over by a Reindeer grows more popular with each passing Christmas season. It is used in school Christmas recitals, outdoor lighting and decorations, clothing, gifts, movies, TV, commercials, and as an annual prime time Christmas cartoon.

The Grandma song has been included in countless Christmas compilation albums, parodies and re-recorded as many times by artists far and wide. Singing and dancing toys that include Elmo’s recording of Grandma are sold each holiday season at the nation’s largest retailers.

As a teenager, Elmo was the exercise boy for "Needles," the Kentucky Derby and Belmont winner.

After losing both parents in a head-on crash at the age of 18, Elmo worked his way through the University of Florida and Auburn University as a bus boy and a window cleaner.

Dr. Elmo became racetrack veterinarian at Aqueduct, Belmont Park, and Saratoga in New York. He then moved to San Francisco. At 35, Elmo began playing the banjo in between patients at his San Francisco veterinary hospital.

In 1979, he came upon a little song written by his friend Randy Brooks that everyone but Elmo agreed was one of the weirdest Christmas songs they had ever heard.  Elmo recorded the song. He then sold his hospital and practice, betting everything on Grandma and using the proceeds to make the now iconic video.

Today Elmo spends his time throughout the year working on his publishing business, traveling, running competitively, playing golf and playing guitar. During Christmas he performs in concert as well as with Holiday Express, a charity that brings joy to hundreds of shut-ins during the holidays.

It’s been said many times (in many ways!) that Dr. Elmo’s voice is synonymous with Christmas. So during the Christmas season he loves to spend time performing (TV, radio/internet and live concerts) and transporting his fans back to their childhood memories of Christmas while creating new warm memories for his youngest of fans.

As a runner, Dr. Elmo won a gold medal in the World Masters Track & Field Championships in Brazil, and the U.S. National Championship in the 1500M, & 5K. This year he won the U.S. National 5K Cross Country Championship, set a new course record at the One Mile Bang in Los Gatos, and is ranked No. 4 in the world in the mile for his age group.

Listen to a great story

How do you end a story? Host of "Radiolab" Jad Abumrad tells how his search for an answer led him home to the mountains of Tennessee, where he met an unexpected teacher: Dolly Parton.

She rose from poverty to stardom with a great singing voice, beautiful prose, and incredible ambition, but it's her wisdom, sense of humor, and generous heart that will stand the test of time.

Susan Cain, author of the book Quiet: The Power of Introverts in a World That Can't Stop Talking, is revolutionizing how people think about the virtues and abilities of those who tend to look inward in this classic TED Talk from 2012.

In response to what is no doubt one of 2020's most defining legacies – the call for a more just and inclusive world – leaders are increasing efforts to build more diversity, equity and inclusion into their organizations. Here are 13 ways to begin. (PDF)

Revisit our 12.03.20 webinar on inclusion for more resources.

Tips from Santa on being a Multiplier (how do you think he inspires the elves to make all those toys?) Get the PDF

Back-pocket questions for leaders - By asking better questions more often, you will spark new creativity, double the intelligence of your team, and make work a whole lot more fun. Get questions!

Takeaways from our July webinar - Liz Wiseman and Shawn Vanderhoven share Multiplier practices for leading in uncertain times. Get all the takeaways.

Brother David Steindl-Rast, a Benedictine monk and interfaith scholar, presents a TED Talk about gratitude as the source of happiness.

Since 1953, Brother David has been a monk of Mount Saviour Benedictine monastery in New York, dividing his time between contemplation, writing, and lecturing. He's the cofounder of gratefulness.org, supporting ANG*L (A Network for Grateful Living).

Own Your Career Own Your Life

With so much going on around us that is out of our control, this is the "missing manual" for 2020 and beyond.

Andy Storch, host of the Talent Development Hot Seat podcast, co-founder of The Talent Development Think Tank, a former partner with Advantage Performance Group, and now a newly minted author, wants you to reach new heights by taking charge of your life. This week's release of Own Your Career Own Your Life: Stop Drifting and Take Control of Your Future is a must-read missing manual for work, life, and the pursuit of happiness.

Get the book - Andy's Daily Affirmations - Other Bonus Resources 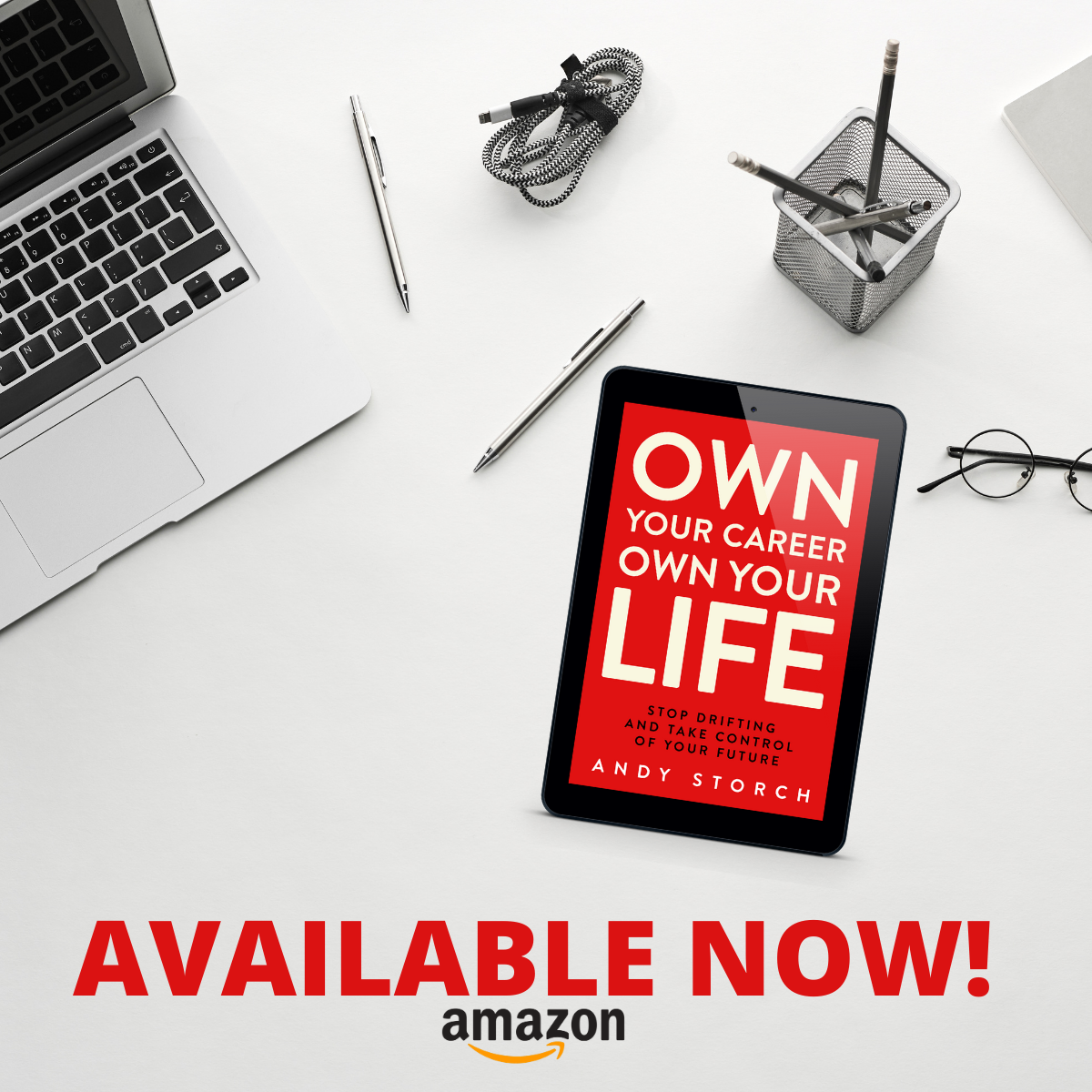 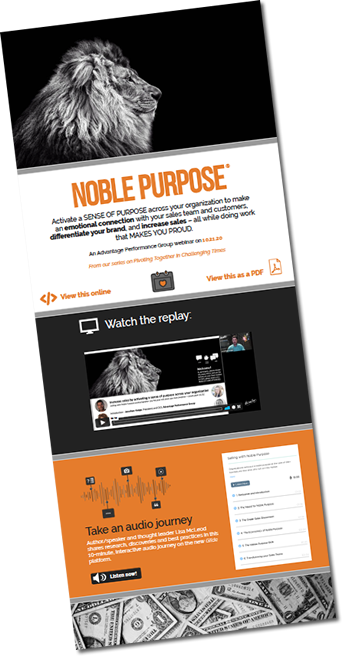 At our most recent webinar, author/speaker and thought leader Lisa McLeod shared with us why having a Noble Purpose at the core of your business is more important now than ever because organizations who don't will get left behind.

Discover your purpose: Take an interactive audio journey with Lisa, revisit the webinar, and access a takeaway tool that can help you envision, activate, and articulate your Noble Purpose today. Available In 2 formats:  HTML - PDF

Take a lovely moment to listen to Maya Angelou reading her poem Human Family from I Shall Not Be Moved, her fifth collection of poetry pubished in 1990.

Bonus: Check out TaskHuman, a phone app for connecting employees with one-on-one video coaching on more than 800 wellness topics, from fitness to focus, motivation to meditation. We're using it ourselves, and we hope you're making time in this crazy, challenging year to take care of yourself as well!  (Tell them Advantage sent you!)

Add a touch of magic to your virtual meetings:

Download the producer checklists from a new training program we created called Backstage Magic, culled from our many hours of experience producing and facilitating training and conducting webinars on the Zoom meeting platform.

The full program includes two self-directed modules and two 90-minute virtual sessions, experienced over a 2-week period. Through instruction, live practice, and performance challenges, participants build the confidence and skills they need to make their sessions run like magic.

Find out the 2 critical elements you need to build trust, especially if you're working remotely, from our webinar on 09.14.20 with Dr. Linda A. Hill, Harvard Business School professor, author of the acclaimed management classic Being the Boss, and founding partner, Paradox Strategies.

More great things are coming soon!
Subscribe to our weekly Talent Development Tuesday newsletter to get updates on the latest topics.